The 95th Raising of the Debt Ceiling

This article comes from local financial advisor Elliott Orsillo (www.seasoninvestments.com). Elliott’s excellent analysis of the history and political realities of the debt ceiling debate is worth perusing.
Hope this helps you!
Sincerely,
John

“I can confirm we will reach the statutory debt limit today.” – US Treasury Official on December 31, 2012

Now that all the political posturing surrounding the fiscal cliff is behind us, it is time for the newly elected Congress to wet their brinkmanship beaks over the debt limit placed on the US Treasury, affectionately known as the debt ceiling. As the opening quote indicates, the US Treasury reached its statutory debt limit at the end of last year. Using “extraordinary measures” and creative accounting, the Treasury thinks it can keep the US government afloat until late February or early March of this year before the debt limit will need to be raised for the 95th time in history to avoid default.

The whole concept of a debt ceiling is a bit strange in that Congress has the power to set revenues (e.g. tax receipts) and spending, but chooses to outsource the process of issuing debt in order to fill the gap between these two (e.g. the deficit). A somewhat weak parallel can be made to a household which has a known income, the power to set spending, and credit to fill the gap between income and spending, which is extended to them by a bank. At some point, a “debt limit” is reached and banks will no longer extend credit to a household who has built up too much debt and is spending in excess of its income. This is where the analogy breaks down since our fictitious household has no control over raising its debt limit, whereas Congress has complete control over it.

The debt limit was first introduced in 1917 when Congress passed the Second Liberty Bond Act. Before this point, if Congress needed to borrow money to finance a specific plan or project, such as digging a giant canal in Panama, it would approve the sale of a lot of Treasury bonds. Each new lot of bonds was considered individually based on the merit of the need. But with the United States’ entry into the First World War, this process became much too time consuming, so Congress delegated bond issuance to the Treasury Department. The delegation did come with a major caveat which allowed Congress to cap the amount of debt the Treasury could issue by establishing a debt limit. 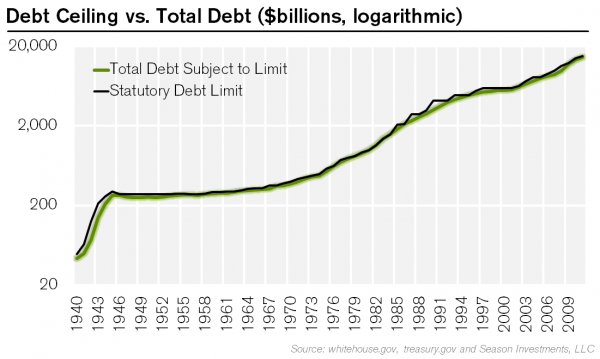 The points on the chart that have the steepest slope are the periods of time where the debt limit was increased the most as measured by the percentage change from the previous debt limit level. We see that the steepest increase was during the FDR administration in the early 40’s, which was followed by a long period of little to no increases. Then in the 1970’s with Nixon taking the US dollar off the gold standard and the embrace of Wimpy economics, the slope of the line turns up again. The slope has roughly remained the same ever since with the exception of the economic and technological boom of the late 1990’s.

It doesn’t take a genius to see that the debt limit is raised once the total outstanding debt either approaches or bumps up against the limit. The raising of the debt limit is a bipartisan practice as well. Since it was established in 1917, it has changed 104 times with 94 raises and 10 declines (although 3 of the declines only lasted for 1 day during political brinkmanship under the Carter administration). Of the 94 increases, 54 have been done under a Republican president and 40 under a Democratic president while the magnitude of the increase has been larger on average under Democrats. 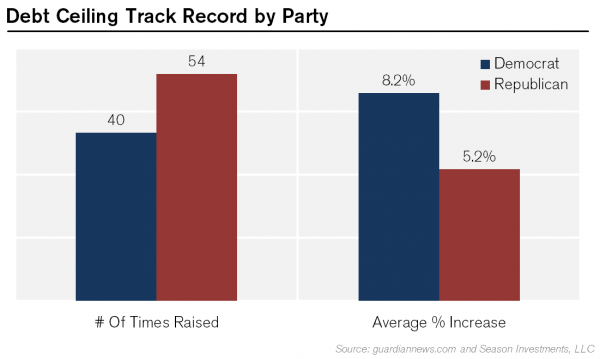 The situation we find ourselves in today is similar to that of 1954 when Republican president Dwight D. Eisenhower butted heads with Democratic senator Harry F. Byrd who chaired the Senate Finance Committee. Eisenhower wanted to raise the debt limit in order to finance the build out of a national highway system. Byrd pushed back stating his concern over the apparent permanency of the national debt that had built up from the Great Depression and World War II. He demanded spending cuts be made in exchange for raising the debt limit. The Treasury had to take emergency measures to avoid default before both sides eventually came to a compromise and raised the limit while also cutting spending.

Not unlike the 1954 debate, the battle over the 95th raising of the debt ceiling has one side stating that it is for the good of the nation while the other believes it is the only tool left in the toolbox to try to reign in government spending. In reference to Congressional Republicans, President Obama stated, “They can act responsibly, and pay America’s bills; or they can act irresponsibly, and put America through another economic crisis.” In response, Republican Senate Minority Leader Mitch McConnell fired back by stating that Democrats “need to get serious about spending, and the debt-limit debate is the perfect time for it.” There has even been talks of the Treasury printing a trillion dollar coin, a loophole which exploits the Treasury’s ability to mint commemorative platinum coins, to avoid the debt ceiling. Thankfully this idea has been put to bed, but it just goes to show the extremes our leaders are willing to consider due to the highly partisan and divisive atmosphere in D.C. today.

Needless to say, we are in for another drawn out debate which will be fought in the press and most likely end with a last minute fix. Our view is that this will be accompanied with short bouts of volatility over the upcoming weeks as investors and traders try to digest every tidbit of information they receive from the soon-to-be highly publicized debate. Although we don’t think the debt ceiling debate will be the catalyst that crashes the party, we do realize that there are real, unknown risks in the market that could pop up at any given moment. To quote BlackRock Investments, “the shell you can hear is not the one that hits you.”

Author Elliott Orsillo, CFA is a founding member of Season Investments and serves on the investment committee overseeing the management of client assets. He spent nearly ten years as a financial analyst and portfolio manager working primarily with institutional clients prior to co-founding Season Investments. Elliott earned a bachelor’s degree in Engineering from Oral Roberts University and a master’s degree from Stanford University in Management Science & Engineering with an emphasis in Finance. Elliott and his wife Gigi have three children and like to spend their time outdoors enjoying everything the great state of Colorado has to offer.